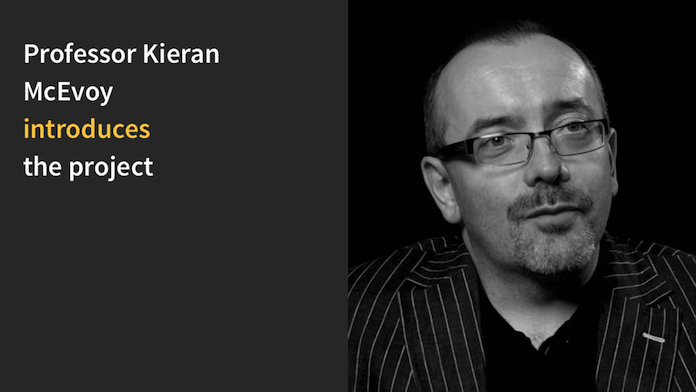 This project will examine the relationship between apologies, abuses and dealing with the past. Using the island of Ireland as a case-study, the project will explore a range of wider themes concerning the ways in which apologies have been constructed, delivered and received beyond the state. It will focus on apologies for harms inflicted by paramilitaries, state actors, churches and the corporate sector.

At a conceptual level, the notion of apology is diversely theorised and almost always focused on the state. Despite widespread acceptance that apologies are key to dealing with past wrongs, in practice the theoretical literature is rarely informed by detailed empirical assessment of the views of apologisers, victims or the general public. States, armed groups, churches and large corporations have in recent decades apologised for past wrongs, albeit with mixed results.

For victims, apologies often appear to be an important element of dealing with the past. However, in practice the precise interplay between apology and notions such as accountability, reconciliation, truth and legitimacy is little understood. More generally, while ‘saying sorry’ is almost a given as an acknowledgement of hurt, there have been few efforts to develop a nuanced grasp of what constitutes a legitimate apology and how the drafting, performance and reception of such apologies may or may not assist in coming to terms with past wrongs.

Through exploring the perspectives of perpetrators, victims and community, this project seeks to provide a comprehensive and rigorous analysis of the role of apologies in dealing with the past.

This project will examine the relationship between:

Apologies and the Law, including: the role of law (in particular criminal and civil liability) in shaping the construction, delivery and reception of apologies; the reception of legalistic apologies by victims; and the ways in which victims and others use law to seek apologies and related forms of redress.

Apologies and Accountability, including: whether it is possible to take responsibility without blame; the extent to which apologies may be linked to other retributive or restorative sanctions (e.g. civil or criminal liability, reparations, compensation etc.)

Apologies, Acknowledgement and Truth, including: whether apologies can be a form of truth recovery; if acknowledgement is distinct from truth recovery when linked to apologies; or if apologies may be used to ‘close down’ public conversations, obfuscate, or minimise personal or institutional culpability.

Apologies, Timing, Choreography and Performance, including: the sequencing of apologies (before, during or after truth recovery or prosecutorial processes); the forms or setting of delivery; whether apologies should be linked to other events; and if and how victims should be involved in drafting.

Apologies, Legitimacy and Audience, including: the factors which may contribute towards a ‘legitimate’ apology; the audience/s to which an apology is addressed; and the variables which render an apology more/less effective for victims and communities and the processes in place to guarantee non-repetition.

Apologies and Leadership, including: how leaders prepare their constituencies for apologies; the status of the individual making the apology (who is apologising to whom for what); and how leadership is exercised amongst victims in response to apologies.

Apologies, Reconciliation and Follow-through, including: the role of apologies in reconciliation, individually or collectively; whether apologies may reinforce abusive power relations (e.g. in pressurising victims to forgive or reconcile); and the importance of ‘follow through’ mechanisms.

Apologies and the National Imagination, including: the effect of past harms in these three domains on national identity in Ireland North and South; and how apologies impact upon the ways in which individuals, organisations and communities imagine themselves – amongst apologising institutions, those being apologised to and the general public.